A story about blind downloading.

on December 30, 2015 No comments:
Email ThisBlogThis!Share to TwitterShare to FacebookShare to Pinterest

Well, I broke down the other day and bought a Mini Mac at Best Buy.  It was on sale - that's my excuse for purchasing at BB.  Otherwise, I'd have shopped elsewhere.

It's a nice learning curve for me.  During my "corporate days", I used Apple products most of the time.  They were provided by the Company, so I didn't have much say in the matter.  They were/are beautiful machines.  And, early on, they only way to get a good GUI device.  When I retired from the Company, I kept both my home computers - a PC AND a Mac.  Thought I could help someone with either product.  But, guess what?  When out in "the real world" no one could afford a Mac!  I eventually sold mine (can't remember now what it was).  PC software was cheaper and more easily obtained.  Read into that what you will.

Lately, I've had the chance to "try" to help a few people with their Mac's.  Problem is - they don't really know what the Mac will do; they just know it's supposed to be the best, and it's pricey.  I needed to learn Mac again (besides, learning something new is good for the mind).  The Mini was the least expensive way to go.  I bought the bottom of the line; so low, it's impossible to upgrade the memory (come on Apple, show a little kindness!).  But, I can upgrade the HD.  I'm now booting from a 1T SSD.  It's almost fast!!!!

I'm slowly getting most of my files and programs over to the Mac.  I even have an external data drive that can be accessed from a PC or the Mac.  Hope that doesn't cause problems with backups.  I'm finding some nifty widgets for the Mac, and even some of the Windows software I use, have Mac versions. 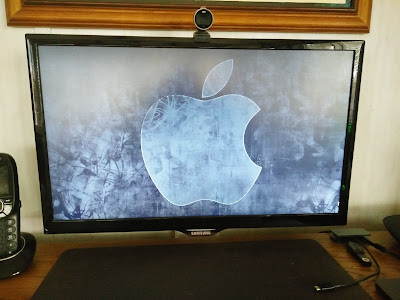 The Mini Mac is a small, albeit pretty, hunk of aluminum that fits nicely in the shelf below the monitor.  Consequently, my "mac" utilizes my Windows 10 monitor, keyboard, mouse, and track pad.  What could go wrong?
on December 21, 2015 No comments:
Email ThisBlogThis!Share to TwitterShare to FacebookShare to Pinterest
Newer Posts Older Posts Home
Subscribe to: Posts (Atom)