It's pretty warm here in Gold Canyon. Yesterday's high temperature on our deck was 113. As I post this, just before noon, the same thermometer shows 106! Today may be slightly warmer.
To all of you that wait until November - December to return to Gold Canyon: you're missing out on some great wine tastings. Actually, the wine tasting group is very small at only two people, and the wine rack is full.
Donna's birthday will be celebrated at the North Rim - we plan on having a happy hour with Barb around 4pm on Monday. Dinner at 8pm. Will return on Tuesday.
on August 29, 2009 No comments:
Email ThisBlogThis!Share to TwitterShare to FacebookShare to Pinterest

This blog is a diary of our 2009 RV trip to PEI and Nova Scotia. We attempt to describe our experiences and to provide access to some of the photos of the trip.
Enjoy
on August 29, 2009 No comments:
Email ThisBlogThis!Share to TwitterShare to FacebookShare to Pinterest

We don't have much shade here in the Park. After today, we have even less - the palm trees have been trimmed. It always looks like they trim too much - only three fronds on each tree have been left. With a little bit of rain, they'll grow back quickly. Now, if we can just get a little bit of rain.
on August 20, 2009 No comments:
Email ThisBlogThis!Share to TwitterShare to FacebookShare to Pinterest

We're back home and really enjoying the heat - 106 yesterday. At least it's getting cool at night - 78 degrees. Not sure when that 78 is happening, because it's still in the high 80s when we go to bed.
We can get about two hours of outside activity (work) done before we have to get into our metal cocoon. Starting about 10am, the A/C runs non-stop until 8pm-ish. Whew! The next electric bill should be impressive.
Thanks to all who followed our Nova Scotia Blog - it was a great trip, but we're glad to be back home.
on August 18, 2009 No comments:
Email ThisBlogThis!Share to TwitterShare to FacebookShare to Pinterest 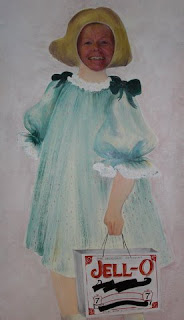 This blog is winding down - we're getting closer to Missouri.

Today we're tooling down I90 in New York when the traffic stopped. We could see that the jam was very long, so we took the nearest exit (luckily it was right next to us) to bypass the mess. Along our detour on highway 20, Donna noticed a museum in LeRoy, the town in which Jell-O was created! We stopped. Donna was so excited she agreed to pretend to be the Jell-O girl. To learn about Jell-O history, go to http://en.wikipedia.org/wiki/Jell-O. It's interesting to note the inventor only received $450 for his invention. The neighbor who bought it from him, later made millions of dollars from the brand.

West of LeRoy we returned to I90 to find that traffic was moving freely, but there was a lot of it. It's amazing the amount of traffic on this road. Shortly after Buffalo, we drove for miles surrounded by vineyards. Steve commented that these must be industrial grapes, there were so many. We later discovered that Welch's has a plant in Westfield, NY (also the home of tonight's campground). That's why there are so many grapes around here.

We plan to be in Indianapolis tomorrow evening, and Desloge the next. After spending a few days with Donna's parents, we'll travel to Fort Smith to help Steve's mother move into her new apartment. After that, it's on to Arizona. We want to be home by mid-August.

Thanks for following our adventure. We are a little tired of moving around so much and are really looking forward to some quiet time in Gold Canyon before the "season" starts.
on August 03, 2009 No comments:
Email ThisBlogThis!Share to TwitterShare to FacebookShare to Pinterest

It has been a long two days, but we're about 860 miles back toward Missouri. We left Cavendish at 7 am, crossed the Confederation bridge into New Bruswick at 7:50. The cost to return over the bridge was $42.50. Breakfast was in Moncton at Jean's Cafe.
In Fredericton, we bought a light bulb for our flashlight, laundry soap, and some fuel, thereby spending all of our Canadian money except 3 cents! I know fuel is much cheaper in the US, but I didn't want to convert funds at another stop.
We got to the border at 12:12 EDT and waited 30 minutes for our turn at the questions. We had already listed our purchases, so all the agent had to do was read the list, make sure the vehicle was ours, and that no one else was setting inside. Our time under questioning was shorter than many of the RVs in front of us. I guess we had less space to hide things than did the 5th wheels.
In the Trailer Life Directory, we found an RV Resort in Bangor that specifically said they catered to adults. We thought that'd be great, so we headed to Bangor. We did not call ahead. In Bangor we found the park, Pumkin Patch RV Resort, to be full. As we were too tired to go on, and the park was extremely quiet, we let them put us in "overflow". This parking was on the perimeter of the park, near the showers and laundry. We had 20 amp power and nothing else. The A/C and tv worked well with 20 amps. Showers were spotless and the laundromat, too. All this cost us $11 and that included $1 for wifi. A really nice park that adults should spend some time in. Not a popup or tent to be seen. We'd give this park the highest of ratings.
Today we drove 460 miles to the Herkimer Diamonds KOA. Donna spent a lot of time researching where we'd stay tonight and couldn't come up with a park in the 350-400 mile range.
There is a tremendous amount of traffic around Boston (we took I495) and on I90 all the way to Herkimer, NY (that's where we got off). Several hours of the drive were in hard rain - didn't slow down anyone. The most amazing amount of traffic was in the opposite direction to us - lot's of people returning to NYC and Boston areas. There are many toll booths on these roads, and in some cases cars were lined up for miles (and I do mean - miles) waiting to either pay or get their tickets. We're used to turnpike service areas as being places that a few cars might stop - on I90 (Mass Turnpike and NY Thruway) these places were full of cars (see SmugMug pictures).
We had originally made a reservation for a river-front site at this KOA. Because it had rained for several hours, the Weather Bureau issued a flood warning. Upon arrival we changed our site to one a little more up the hill AND with a gravel pad. We were told it was a large pull-thru site at a premium price. I think it's the most we've ever paid for a site - $55. But when you average it with the $11 site of last night, the two nights were only just high, not outlandish. It is a very large site.
We'll try to make Ohio tomorrow.
on August 02, 2009 No comments:
Email ThisBlogThis!Share to TwitterShare to FacebookShare to Pinterest
Newer Posts Older Posts Home
Subscribe to: Posts (Atom)